The BOSS DS-1 is a classic distortion pedal that gives an even gain level at high and low volumes. Used by countless musicians through the years. Unmistakable by it's orange glow, the Boss DS-1 was the pedal to copy and has influenced many a guitar player. 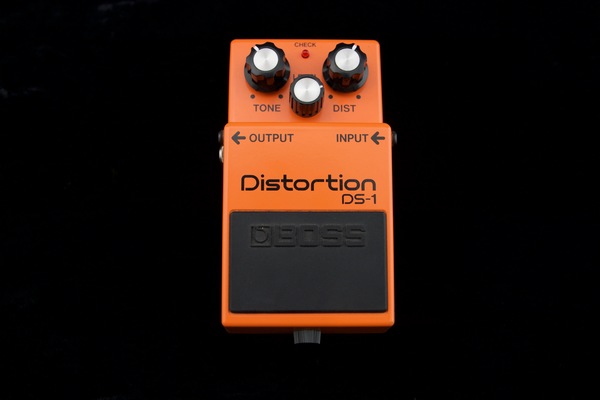 The BOSS DS-1 Distortion was released in 1979 and is still in production today.

The DS-1 produces a high gain distortion that is generally even across app volume settings. The pedal is very bright in tone, which cuts through a mix and articulates well for both single note melody and leads, as well as multiple note chords, particularly the root/fifth power chords.

Very well made, metal case, and a larger lever that acts as the bypass switch. The battery compartment is easy to access by loosening the thumbscrew at the front of the pedal. It takes a standard 9v Battery or a standard AC adapter producing 9V dc 300 mA with a center negative barrel style plug.

The DS-1 has been in production of over 30 years, and due to its affordability, has been on most guitar players pedal boards at one point or another.

The DS-1 is available at music stores that are an authorized BOSS dealer, and well as online stores. There is also a large used marker for the pedal, and can be found on Ebay, and Reverb.

The DS-1 has a basic circuit design, based on a single op-amp. The distortion is produced using a variable gain circuit with diodes shorting the output to ground to produce hard clipping of the input waveform similar to the Pro Co RAT distortion pedal. This distortion stage is followed by a passive tone filter and volume control. The tone control is scooped in the midrange. It consists of a simple fixed -6dB/oct low-pass filter and a simple fixed -6dB/oct high-pass filter using a potentiometer to mix the two signals. (reference - https://en.wikipedia.org/wiki/Boss_DS-1)