A classic distortion pedal The Rat has many incarnations. Released in 1978 The Rat has had a long a long history. Known for its gritty distortion tone, used by many of the early hard rock and punk rock guitar players. The Rat has been released with various case design's, this example is a reissue of the large box. 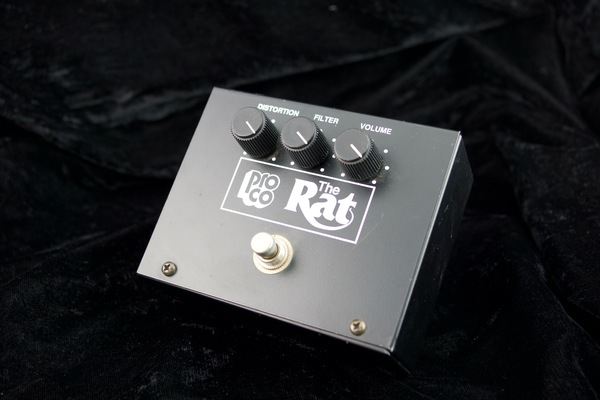 The Rat distortion produced by Proco Sounds factory in Kalamazoo, Michigan. Started out as a handbuilt unit, and has grown into a full line of distortion pedals. Known for it’s gritty tone. The Rat used is a 90’s model. The Rat (Larger Box) Version2 produced between 1981-83. There have been various reissues through the 90's of the large box case. With prices for the 80's Version2 Rat passing $700, the reissues have not started to gain in price also.

Just stomp on it and go. just 3 controls Distortion for the amount of gain, Filter for Tone control, and a volume control.

Super gritty distortion and very bright. The tone can be rolled down, but it’s best at noon.

Metal case, and very clean electronics wiring. The IC chip is the LN308N.

Many versions of reissued models are available. For The V2 is becoming less available to find with one a few auctions on Ebay, and Reverb.

Be the first to review this pedal