The TS9 Tube Screamer is produced by Ibanez and is a classic overdrive pedal used by countless musicians. Ibanez has released various medals within the Tube Screamer line, starting in the 70’s, 80's, reissued in the 90's and is in production today. The TS9 is known for it’s warm tones, and mid-range boost which has made it a favorite among blues and rock players. 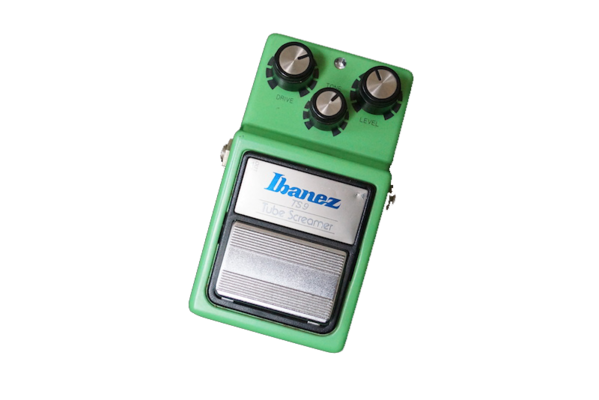 The Ibanez TS9 Tube Screamer released in 1981 and discontinued in 1985. Then re-issued in 1993 and still in production today. The TS9 was an updated version of the legendary TS808 and based on the same circuit design. The pedal produces a classic sound of an overdriven tube amplifier. The pedal has basic controls a level knob, Tone knob, and Gain knob. It’s sound is known for its mid-boost and medium drive. most closely associated with Blues and Rock players such as Stevie Ray Vaughan, The edge of U2.

The TS9 gives a very warm sounding overdrive. It is even and smooth even with the tone knob all the way up. The gain can be very subtle and be just a boost to the signal up to a bluesy crunch so closely associated with Stevie Ray Vaughan’s sound. By rolling the volume knob of your guitar the gain reacts in tone giving a wonderful dynamic quality and responsiveness.

Very well made, metal case, and a larger lever that acts as the bypass switch. The battery compartment is also easy to access. It takes a standard 9v Battery or a standard AC adapter producing 9V dc 300 mA with a center negative barrel style plug.

The TS9 was the follow-up to the TS808 in 1982. The pedal case design was the same across all of the 9 series pedals. With the large toggle switch for the bypass, and bright colors for each model. The bright green paint of the TS9 being one of its distinctive features.

The TS9 is the most commonly found model in the tube screamer series. The reissue is still in production and can be purchased new. The early reissue has been in production since the mid 90’s and widely available on the used market. The early 80’s pedals are becoming very rare. Variations: There are many versions of the TS series. The TS9 being the 2nd incarnation. There is the TS-808, TS9, TS10, TS10 stagecraft, TS7, TS808 reissue. The circuit is largely the same in design, but the components used through the years very tremendously resulting in wide range in tonal output. The early units are highly collectible particularly from the late 70’s and very early 80’s.

The tube screamer was designed by Mr. S.Tamura. The Tube Screamer uses electronic field-effect transistor (FET) bypass switching. The circuit uses transistor buffers at both the input and the output. The overdrive is produced using a variable gain operational amplifier ("op-amp") circuit with matched diodes in the feedback circuit to produce soft, symmetrical clipping of the input waveform. The overdrive stage is followed by a simple low-pass filter and active tone control circuit and volume control. The sound is closely associated with the use of the JRC4558D IC chip, although different chips have been used through the years also. The TA75558 chip is pictured with the TS9 that was reviewed.